Example of separation where the highlight white is damaged and is covering just about everything. 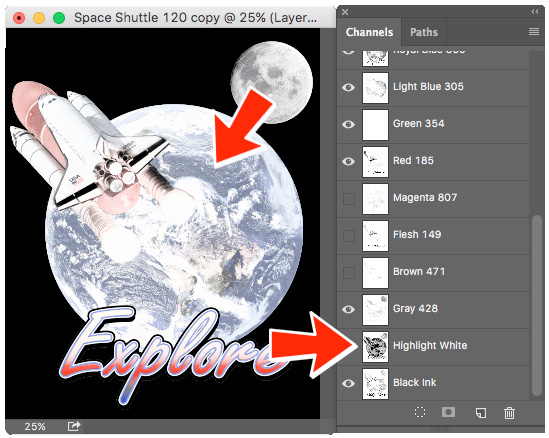 The separation above was run using a freshly updated and installed copy of Photoshop CC 2015 affected by the bug.

When running separations with UltraSeps using Photoshop CC 2015 and possibly future versions yet to be released, some of the white underbase and highlight white channels may not render correctly.

This is a bug with CC 2015 and may also be an issue with versions going forward although we have yet to see this with versions 2017 and 2018.  So likely the issue will no longer appear.

I’ve traced this bug to an issue with the manner in which Photoshop CC 2015 generates its Preferences File. It seems as though the Preferences has a glitch whereas certain functions of JavaScript’s do not run correctly and causes some sort of confusion with the foreground and background colors.

Running our Repair CC 2015 Action resolves this abnormality and after doing so, all separations will render correctly. Its important to note that if ever resetting the Preferences due to some other issue, this Action will need to be run again.

Therefore, if separations don’t appear correctly with odd looking underbase whites and dark highlight whites with ink where none should be, simply run the Repair CC 2015 Action to fix.

To use, simply load the Action into the Actions Panel of Photoshop and run.

A video is also available here which not only discusses how to use the repair action, but also provides an example of the issue itself before and after the simple fix.